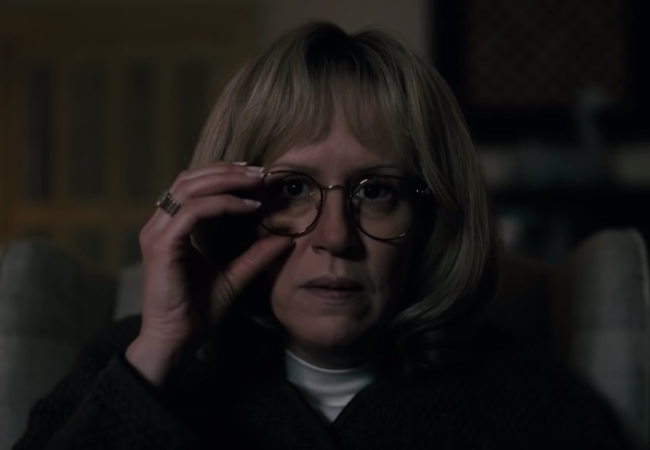 Viewers who followed the ubiquitous story in the late ’90s remember Tripp well. But Burgess is aware that younger viewers may be hearing about her for the first time.

“Monica Lewinsky herself was made so famous by this crisis, that name is still known, even to teenagers. And, of course, Monica’s reemergence in the past few years has made her a positive public icon for young women,” Burgess said. “But… I remember talking to someone who was in their late 20s and didn’t know the name Linda Tripp at all.”

Longtime Murphy collaborator Sarah Paulson (American Horror Story, Ratched) plays Tripp in Impeachment: American Crime Story. But the real-life Linda Tripp passed away in 2020 before she could ever see Paulson’s portrayal of her on cable television. Tripp and Lewinsky became friends while working at the Pentagon. Tripp has faced immense scrutiny for recording her phone calls with Lewinsky, who revealed intimate details about her sexual relationship with the president. But Burgess made a point to be very fair in telling Tripp’s side of the story.

“Different generations are going to hear and feel and experience the story very differently,” Burgess said. “For some people, this would be good information — and some people have read every book and podcast and know all the sort of intricacies of it. I was at a dinner last night where my friend… was telling her friend all about a very specific incident that I do depict in the show, and she hadn’t even seen my show yet. So it’s really fascinating to play to all these different audiences and I’m really curious how it’s all going to land on everybody differently.”

Without Linda Tripp, one could argue that Monica Lewinsky might never have become a household name. But Burgess feels differently.

“Linda’s decision to record Monica, and then to deliver those tapes to Ken Starr’s office, ensured that Monica would be caught up in a federal investigation. I don’t personally believe that Linda wanted to have something as horrible happen to Monica as happened to her. That’s my personal belief in sort of writing this character for several years. I don’t think she understood exactly the forces that she was unleashing,” Burgess said. “They were forces of misogyny, and they landed on Linda, too, and the tragedy of this tragic story is that Linda unleashed forces that harmed a young person who I believe she was friends with, and I don’t think she had that intention for harm of that level to occur… we also wouldn’t know who Monica is if not for Bill Clinton, and Ken Starr, and Matt Drudge, and Michael Isikoff.”