Making Movies With Friends: Check out this terrific interview with Hannah Marks, director of the Tribeca film Mark, Mary & Some Other People, about how she captured what it’s like to be in your mid-to-late 2os. The film is about a couple attempting [clutches pearls] ethical non-monogamy.

‘Polite’: I keep seeing Variety references to films getting “polite” four- or five-minute standing ovations at Cannes. Folks, we need to recalibrate: “Polite” is maintaining a frozen smile while begrudgingly holding a door at Dunkin Donuts.

Recovery: PricewaterhouseCoopers, the nice squished together accountants who tabulate Oscar votes, also do economic forecasts. Deadline reports that their latest one, on the state of Hollywood, found that “theatrical revenue won’t return to 2019 levels until 2024.” But PwC says streaming will do just fine: It will grow at an annual rate of about 10.6 through 2025.

Black Widow by the Numbers: The perfectly okay Black Widow arrived in theaters and on Disney+ Friday, and it did well, by pandemic-era standards. How well? Well:

—It earned  $215 million globally, including $80 million in domestic box office, $78 million in international box office, and over $60 million from Disney+ Premier Access, wherein Disney+ subscribers could pay $30 extra to watch it at home.

—Its  combined theatrical and Disney+ Premier Access opening made it the only film to surpass $100M in its opening weekend since the start of the pandemic.

—And, in the most carefully parsed statistic: It had, according to Disney, “the highest domestic opening weekend for a Marvel Cinematic Universe origin story after Black Panther and Captain Marvel.”

May I Editorialize? (Note That Some Black Widow Spoilers Follow): We hear a lot about how movies are doomed, but these numbers suggest otherwise. Black Widow is largely a bridge between Marvel’s recent past (it occurs after 2016’s Captain America: Civil War) and near-future (it sets up the Disney+ series Hawkeye), that also retcons in a significant new character played by Florence Pugh (pictured above). It does a lot of connecting the dots between other projects, which doesn’t leave much room for it to tell its own story. But if a minor Marvel movie like this can pull in this kind of money, imagine what an actual event on the scale of Infinity War or Endgame could do.

May I Editorialize More? I’ve come around to liking the concept of simultaneous home and theatrical releases, at least for blockbuster-scale movies, and especially for blockbuster-scale movies we’re not sure are worth a trip to the theater. (Though I was pretty excited for Black Widow before seeing it.) That said: Disney+ and other streaming services need a simple one-click option that doesn’t require ordering the movie on your phone or laptop, which is annoying. And if a movie costs $30, in addition to your Disney+ subscription costs, you should never see this screen, which we saw several times Friday night: 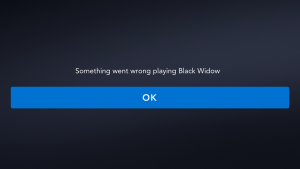 Comment of the Day: Ken Leonardi responds to this post on a 15-second cigarette-lighting scene in The Godfather: “This is my key scene, too. All of my friends don’t notice it until I point it out and tell them this is the beginning of Michael’s transformation. But to be fair, having seen The Godfather dozens of times, I didn’t notice it until after several viewings. I still seem to notice something new every time I watch it. I agree with your analysis of the scene, but I also think it shows that Michael is steady, unshakeable, and can handle immense pressure. In other words, Michael’s a rock. This helped Michael in becoming a good Don, but also in any other endeavor he would get into if he wasn’t in the life of crime.” Thanks Ken!

What’s That? Oh Yes, Of Course: Here is the scene, and the wonderful video essay about it by Thomas Flight: