An Irish ghost story about a mysterious lady in white haunts the famous murder case of Sophie Toscan du Plantier, the subject of Netflix’s new true-crime docuseries Sophie: A Murder in West Cork.

Mentioned briefly in the first episode of the limited series, the legend surrounds Three Castle Head in West Cork, where the ruins of a medieval castle still stand beside a lake, according to the official Three Castle Head website.

The castle is called Dun Lough, which comes from the Gaelic “Dun a Locha” or “fort of the lake.” The website details that it is was the castle on the edge of a cliffside built not long after the Norman invasion of Ireland in 1207. It’s the oldest of the O’Mahoney castles, all of which were built by Donagh na Aimrice O’Mahoney, nicknamed Donagh the migratory because he was a scholar and a traveler who was known for taking religious pilgrimages. He built Dun Lough on the site of an ancient Celtic fort.

But like all good ruins, this one is said to be haunted. They call her the white “Lady of the Lake” — and some believe the grisly warning she brings to all those who see her played a part in Toscan du Plantier’s tragic death in December of 1996.

According to the Netflix series, on the day before Toscan du Plantier’s murder, she visited Three Castle Head and looked inside the ruins of Dun Lough. There, she saw what looked to her like the ghost of a woman wearing white. Later that day, she visited the home of her friends, the Ungerers, who bought property on Three Castle Head in the 1970s and run a sheep farm there, according to the website. She told them the story, expressing fear over having seen the ghost. 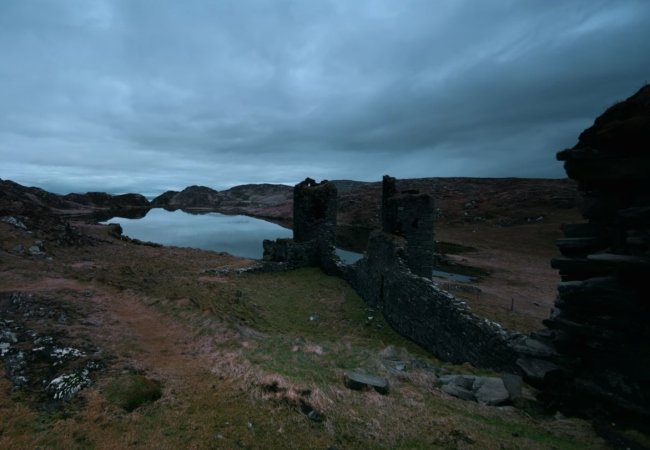 “She saw something terrible, and it scared her,” Sophie’s aunt, Marie-Madeleine Opalka, says in the doc. “She arrived at the Ungerer’s house really scared, saying, ‘Oh my God, I saw a woman, like a white shape.’”

What Sophie described sounds a lot like the “Lady of the Lake,” the ghost who is said to haunt the castle grounds. According to the Three Castle Head website, the O’Donohue family were the last to actually live in the castle before it fell to ruins. But as legend has it, the castle is cursed. Each member of the O’Donohue family is said to have died tragic deaths, causing, as legend tells it, a single drop of blood to fall from the tower into the lake below each day. The legend also says that if someone sees the white Lady of the Lake, she foreshadows their imminent death.

Won’t You Take 10 Seconds to Sign Up for Our Newsletter?

“Three Castle Head is meant to be haunted by a melancholy female ghost, the white lady,” Elizabeth Wassell, a writer and former resident of Schull, the nearby town featured prominently in the series.

“When you see her, it means you are going to die in the hours that follow,” he says in the doc.

Whether or not you believe in legends, you that’s exactly what happened to Toscan du Plantier. She was murdered the very next day.

Her aunt believes that if she had told a local Irish person what she’d seen, the local would have done everything possible to protect her.

“She didn’t go to an Irish person’s house,” said Opalka, Sophie’s aunt. “An Irish person would never have let her leave.”

For those curious about the legend of the White Lady, you can visit Dun Lough for yourself. You can stay there in one of their vacation cottages, or even have your wedding there. Just don’t say you weren’t warned about the Lady of the Lake.